If rabbits could talk 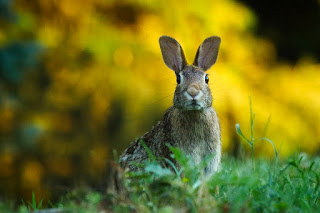 Today I want to tell you all a story. It's a true story and it's a story that makes me happy. Maybe you might smile, too.

I was nineteen, and my second year of college had just come to an end. In a couple days, I would be joining a team of people to fly to Bolivia and help with the building of a Bible College there. A couple months after that, I would be getting married. It was an exciting time in my life, but also chaotic and stressful. I had no idea what to expect, either in South America or in marriage. And I had no money.

For months I had been raising money for the trip, and had secured just enough, but there was no extra. Other members of the team were talking about fun gifts they were planning to buy for their friends and family as souvenirs, but I had to be content that at least I had enough money for food. It was enough. But I prayed a little prayer, anyway, asking God if just maybe He would send some extra cash my way.

As I packed up my dorm room, my eyes fell on a small collection of stuffed animals sitting on top of my dresser. I liked stuffed animals. I still do. In the middle of the stuffed animal pile was a Velveteen Rabbit. I had received this rabbit as a Christmas gift from my Aunt Bev when I was little and I loved her. She was soft and pretty and wore a red velvet dress with a white lace collar. I walked over to the dresser and picked her up.

You know the Velveteen Rabbit story? How the stuffed rabbit becomes real because of how much it was loved by its owner? I thought about that story, wondering what my rabbit might say if she could talk. I imagined she would say something like, "Please, won't you wash my pretty, red dress? It's dusty and stained and oh-so-shabby."

Sure, I'll wash your dress, I thought. Then you'll look as good as new. I unfastened the dress in the back and pulled it over her head, careful of her floppy ears. And that's when it happened.

There are moments in life when you feel like God is watching over you. As a hundred dollar bill fell out from under the Velveteen Rabbit's dress, I knew it was one of those moments. I picked the money up off the floor and stared at it. A hundred dollars. God had given me a hundred dollars.

Now, I don't consider the fact there was money in the bunny's dress a miracle. My whole childhood I'd had a habit of hiding money in various places in my room and forgetting about it. Surely this monetary discovery had something to do with that old habit. Right? But the fact the money had remained lodged in the rabbit's dress all those years, even through a move to Montana? And that I had decided for some reason, at the most unlikely of times, to wash the rabbit's dress? Yes, that was a miracle.

I washed the dress, took the money with me to Bolivia, and bought a variety of interesting items in the market, including a red Quechua blanket I still use to this day. The trip was an amazing experience. But even more amazing was the gift the Velveteen Rabbit gave me that day. The gift I believe God gave me.

And in the fourteen years since, anytime I've been without enough money, which has been many times, I've thought about the Velveteen Rabbit and her pretty, red dress.
Posted by Katie Powner at 1:26 PM No comments: