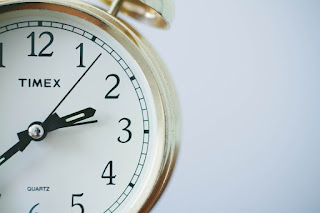 Time is ticking. He's leaving soon. He who has been with us since he was three days old. Who weighed barely five pounds and could only eat one ounce of milk on a good day. Who now sports thick, chubby legs and scarfs down rice cereal and full bottles with wild abandon, and draws a smile from everyone he meets. He's leaving soon.

Part of me is relieved. I mean, a baby is hard work, you know? Let his mother get up with him at all hours of the night. Let her try to force-feed him medicine when he gets an ear infection, and change diaper after diaper after diaper. Let her wash endless piles of tiny clothes and get to the point where she doesn't even bother changing her shirt when he spits up all over it because she knows he's just going to do it again in three hours.

Sure, the look of anticipation on his face when I hold out my arms and reach for him is one of the most beautiful sights I've ever seen. Sure, he makes the sun shine when he smiles and fills our home with laughter. Sure, his arms around my neck and his cheek against my cheek touches something in my soul that words cannot describe. That only the vibrant, uninhibited colors of the sun rising with hope over the Bridger mountains can describe. Sure, I love him. I love him.

I knew this day would come and I don't begrudge it. How could I? A family being reunited is a wonderful thing. It's what I want. And I'm honored to have played a small part in this laborious process that brought a young man and woman from the pit of addiction to stability and life, and brought a boy back to his home. Because that was the goal. That was the plan. That he would be able to go home.

Yes, home. He's going home where his flesh and blood will have a second chance to do right by him and give him the love and security unique to biological families. Not more or less or better or worse than families whose DNA don't match, but certainly unique. No, I don't begrudge him that. I want what's best for him.

So I will hold back my tears and wish him well when this "soon" day comes, and I will rejoice for the sake of family. Family ...in all its broken, beautiful, messy, hopeful, bittersweet glory. Family.

But I hope his mother understands if I hold on to his hand a little longer than I should as I place him in her arms and say goodbye.
Posted by Katie Powner at 12:28 PM 2 comments: 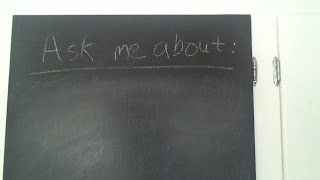 A few years ago, I spray-painted one of the cupboard doors in my kitchen with black chalk paint so I could use it as a message board. It became a handy place to write notes, and also a useful surface for demonstrating lessons during homeschool, such as how to spell A-N-O-N-Y-M-O-U-S or something. Because ANONYMOUS is a tricky word.

After a while, I wrote the words "Ask Me About" in big letters at the top of the board. Then, I would write down subjects that we discussed during school so that when Andy came home from work, he could see what the kids had been up to. I might write something like "Galileo" or "three types of rocks" or "nouns and verbs." Then Andy will come home and say, "Hey, Simon, what are the three types of rock?" Or "Hey, Michael, what is the difference between a noun and a verb?"

It's been a great way to keep Andy involved in the learning process, and also a great way to reinforce lessons learned in school by making the kids review them at the end of the day. But the board is used for a lot of other messages as well. At any given time, it might have phone messages (like "Larry called"), reminders (like "return library books), and school notes all written on it at once. I'm usually in a hurry when I write things down, so the messages are often in shorthand. But usually the point comes across. Usually.

This year for school Simon got a really cool Astronomy book that he loves. Something about the immensity of space and the fact that a lot of celestial objects are made of gas appeals to him. We've completed the chapters on most of the planets already and when I write the name of the planet on the board Andy will ask Simon about it. Simon will eagerly explain everything he's learned. Often dramatic hand gestures are involved as well as explosions, whether they are relevant or not. Because Simon can't describe anything without an explosion.

Anyway, last week Andy ordered some metal pieces from Bridger Steel, which he needed to complete the new eave on one side of our house. When a nice lady from Bridger Steel called to say the eave pieces were ready, I wrote a quick note on the board so I wouldn't forget to tell Andy. Then, in school, Simon and I finished the chapter on a certain planet.

And so it was that when Andy came home, the board read:


Ask Me About:
the eaves in
Uranus
You might have to read it out loud to get the full effect.﻿
Posted by Katie Powner at 12:48 PM No comments: