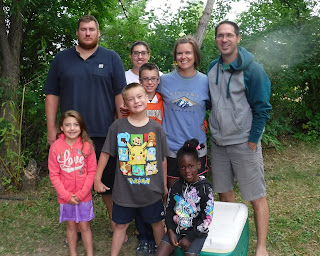 It was the end of our third day at camp. (Only the third day? Felt like we'd been there a month). We walked down to where a duo called the River Town Rounders were performing folk tunes in the gazebo. Who doesn't love folk music?

As we sat on benches and listened to them sing, a guy in a black Punisher t-shirt openly carrying a Glock with an extra magazine joined the crowd. O-ka-ay. Sure. I mean, it’s legal in Montana…but, wait? Really? Regardless of your opinions on handguns, it was a bizarre sight in the gazebo with the folk singers. Then, even more bizarrely, the Punisher guy's mother asked the River Town Rounders if she could go back to her camp to get her harp and play with them. Because, you know, who doesn't bring their harp to camp, right?

You can't make this stuff up, people.

So, Punisher’s mom lugged her harp to the gazebo to jam with the River Town Rounders, and we decided it was time to hit the hay. Back at camp, we found the rock in the bathroom door had been removed yet again, but the door code was still wreaking havoc. Not only did you have to push the numbers in the correct order (a difficult task for a 4-year-old), but you had to turn the handle just so within a certain amount of time after hitting Enter. Good luck. And if the person before you had failed, heaven help you.

So we decided it was time to get serious. Bladders were at stake. We pulled the door all the way open and dragged over the nearest garbage can AND one of those Safe Smoker cigarette receptacles to hold it open, then sat back to watch.

It wasn’t long before a woman came by loudly wondering why the door was open because “doesn’t anyone bleepity-bleep know that all the critters are going to bleeping get into the bathroom?" Could she be the one who'd been thwarting our attempts to make the bathrooms available to all people, regardless of sex, age, finger dexterity, and number recognition? Maybe. But she made no attempt to shut the door, so I wasn’t convinced she was the culprit. We went to bed without any clear answers.

The next morning, there was once again some sort of activity involving balloons and white canopies going on in the little field next to our sites. What now? A Daughters of the Revolution rally? It could be anything at this point. OH, it's some construction company's annual summer BBQ that apparently lasts ALL DAY, complete with an open bar. Right next to our campsite. Sure, why not. They also have access to the KOA splash park, where one kid split open his chin and another lost both her top front teeth playing King of the Hill on the mini-slide.

At least there weren't any helicopters dive-bombing us, since we apparently were NOT at war, and the hot tub was hot again. But there was a mysterious puddle forming under our tent. Where was all this water coming from? Turned out one small soaker hose came from a different valve than the rest and had been slowly but surely dripping away directly beneath my and Andy's air mattress. No wonder we'd been so cold at night.

My brother's tent seemed to have been spared, though...oh wait, the KOA people set up a giant field sprinkler on the grass on the other side of the trees. Well, that shouldn't be a big deal, the trees should protect us. Except the sprinkler was so powerful it actually shot through the trees and hit the side of my brother's tent with the force of a tidal wave every five minutes. For eight hours straight. Eight. Hours.

The last night finally arrived. My suspicions about the bathroom door were finally confirmed. It was not the foul-mouthed critter-hater shutting the door, but the harpist. The harpist! And what could we do? She was Punisher’s mom for crying out loud. Not someone we particularly wanted to start a feud with. But after she pulled the garbage can and Safe Smoker away and slammed the door with a huff, I snuck over and put them back. I ain’t afraid of no Glock. Or maybe I am, which is why I waited until she left.

Aside from a brief but intense showdown with the fat squirrel, who tried to shred one of our camping chairs to use for his nest, the rest of the night was pretty peaceful.

Check-out morning came. Sleeping bags were rolled up and tents torn down. Finally we were going home. My mom joked about the worst campout of our lives, and my brother mumbled that he was never going camping again.

But I laughed. Because today's series of unfortunate events are tomorrow's fond memories, and there's no one I'd rather make memories with than my family.
Posted by Katie Powner at 11:12 AM 4 comments:

It started with a "Daddy, I don't feel good" before we even got to camp. (And by camp I mean the KOA in Great Falls, which I know doesn't even qualify as camping to some of you, but we needed an easy place to meet up with my family and this was it.) Andy pulled over JUST in time for Simon to fling himself from the car and puke in the gravel on the side of the road.

It was all downhill from there.

We pulled into Site #6 at the KOA and stepped out onto a way-smaller-than-it-looked-in-the-pictures grassy area covered in dog poop. Right where our tent was supposed to go. You know what else was waiting for us where our tent was supposed to go? A yellow-jacket nest. Before I could even get the dog poop cleaned up, the horrible, vindictive buzzing creatures had zeroed in on the most vulnerable among us: poor Simon.

While Simon wailed in pain over two stings to the neck, I frantically tried to find some ice or something to give him. Why hadn’t I packed Benadryl cream? I’m a horrible mother. Then, another scream pierced the air. My sister-in-law limped over from neighboring Site #7 bleeding from her foot. She had stepped on - of all things - a tiny American flag pin laying on the ground pointy side up.

We’d been in camp less than 20 minutes.

The first night was miserable. Every hour the sound of my brother’s air pump whirred through camp as he re-pumped his air mattress, because it, too, had been punctured by the American flag. (This is the price of freedom, people.) Then, every time one of the kids had to get up to go to the bathroom…guess what? They couldn't get into the stupid building because the code on the door wouldn’t work. Not to mention that the man in Site #5 snored so loud we thought there was a landslide, and the drip hoses strewn willy-nilly all over the ground squealed like incoming missiles in the quiet of night. Needless to say, no one got much sleep.

So we were all exhausted the next day. But we were together, and that’s what camping is all about, right? Spending time as a family away from TV and cooking implements and clean sheets.

We spent most of the day at the Electric City Water Park in Great Falls and returned to camp with high hopes of having a better night. After all, we figured out how to shut off the squealing hoses, we stuck a rock in the bathroom door so no one would have to pee their pants, and my brother patched the hole in his air mattress. Things were looking up.

Then, in the wee hours of the morning, what was this? What are these strange sounds? Is the KOA being invaded by hostiles? Nope. A church group had come bright and early to set up a day camp in the field next to our sites, of course. Because the only logical place to hold a Bible camp is in the middle of a KOA while people are sleeping.

Did I mention the automatic paper towel dispensers in the bathrooms did not, in fact, automatically dispense? And that there was an overweight squirrel casing our supplies every time we turned around?

Anyway, our third day at camp was very strange. Everywhere we turned, there were little kids in matching neon green shirts doing crafts and singing about The Golden Rule. The hot tub at the KOA splash park was about as warm as the Gallatin River. And we caught probably a hundred yellow-jackets in the traps we set up.

But that wasn't the weirdest part. The weirdest part was that so many helicopters from the nearby Air Base were flying back and forth directly overhead that we literally went to the KOA office to use their Wi-Fi so we could check and see if we had gone to war with North Korea. I'm not even kidding. We thought World War III had started and we had missed it. Plus, someone from a neighboring site was working against us to keep those wretched bathroom doors closed. We didn't know who it was, but every time we stuck a rock in the door, they would come along and kick it out.

A mystery was definitely afoot.

And we had two more nights to go.
Posted by Katie Powner at 9:42 AM No comments: