What do these 3 things have in common? 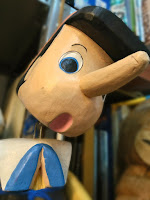 They want to be real, too.

People often ask foster parents questions like: "What happened to (so-and-so's) real parents?" "Why were they taken away from their real parents?" "When are they going back to their real parents?" I know what they mean, but I also know that getting up five times a night with a kid having nightmares is real. Changing ten poopy diapers a day is real. Rocking a baby for ten hours a day while he goes through withdrawals is real. Shuttling an 8-year-old to counseling appointments and speech therapy three times a week is real. And that's what foster parents do.

Sometimes when someone finds out I'm a foster parent, they glance over my brood (counting silently in their heads), and say, "How many of these are your real kids?"

It's tempting to respond with sarcasm and say, "Well, none of them are fake." Har har. But I understand what they're asking. There was a time in my life when I might've phrased it the same way, before I learned the appropriate terminology. So I don't get upset with them for using the term "real." But I do want to know this: Why does it matter?

What difference does it make which of these children came from my body and which came from another woman's body? It doesn't change the way I care for them. Or love them. Doesn't affect their importance to me and shouldn't affect their value to you. They are a child in my home whom I am responsible for. They could be biological, adopted, foster, neighbor...they could be my second cousin's husband's from his first marriage. Doesn't matter. If they're in my home and I'm caring for them, they are real to me and I am real to them.

In The Velveteen Rabbit by Margery Williams, the Skin Horse explains to the Rabbit how a toy becomes Real by being loved for a long time. And the Rabbit asks, "Does it hurt?" The Skin Horse responds by saying, "Sometimes. But when you are Real, you don't mind being hurt."

And that's what it's like to be a foster parent. It hurts sometimes, but you don't mind because you are Real - just when a child needed a real parent the most.
Posted by Katie Powner at 1:17 PM No comments: