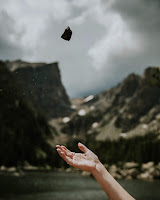 But time marches on. We fostered another little boy for a few weeks, and then after he left we didn't get any calls from the state. Weeks went by. Months. No calls. My arms started to feel a little empty. I thought if the state called looking for a placement for another baby...well, I kind of hoped they would. I was ready.

Then it happened. A newborn was in the hospital and needed a safe home. Would we take him? Were we willing?

My heart was immediately invested. Yes! Yes, we would take him! But...we were on vacation. Can he stay with another family until we get back in a few days?

The case worker said yes. We told our kids they could expect a new baby when we returned home. My mind raced with plans. I'd have to get the bottles back out...set up the crib...see what size diapers I had under the bed...I couldn't wait to meet him. My heart was full to bursting. Then, plans changed.

Instead of moving the baby from home to home, the case worker decided it was best for him to stay where he was, with the family who had agreed to take him while we were gone.

He would not be coming to our house.

I would not be setting up the crib.

Why are we doing this? I wondered. Why did we sign up for this roller coaster ride? I prayed and asked God why this was happening but couldn't hear an answer over the roar of disappointment in my ears.

Three days after we got back, we got another call. No, not from the state. Not to foster. Instead, a nonprofit orphan-care ministry in Bozeman was bringing five kids from the Philippines to stay with five host families here for a month to meet other families who might be interested in adopting them. Five older kids who are running out of time to find a forever family. The program is called Summer of Hope. The kids were coming in a few days. But...one of the host families had to drop out. They needed another one ASAP. One that had a current home study and a foster care license and no placements. Would we do it? Were we willing?

A child needed me. Needed our home. Needed a hand to reach out and span the distance between spending the rest of her life in an orphanage and finding a forever family. Yes. Yes, we would do it. No, it wasn't what I had wanted. What I had planned. But yes, we would host this girl. And when she comes, we will advocate for her, be her champions, so this can truly be a Summer of Hope for her.

You know, sometimes plans change. I don't know what God is up to. Why He worked this out the way He did. But I know that no matter how hard it is, how much it hurts sometimes, having a willing heart and an open home is a great position to be in.

You never know what might happen when plans change.


Photo by averie woodard on Unsplash
Posted by Katie Powner at 12:26 PM 4 comments: