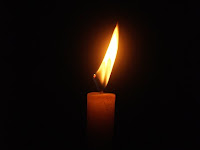 It was one week before Christmas, 1994. Multi-colored strands of lights blinked in the windows. My mother's tree, with its white lights and crystal snowflakes, graced the living room, while the tree in the family room that belonged to us kids...well, let's just say what it lacked in beauty it made up for in enthusiasm.

My siblings and I were eagerly awaiting the big day. The excitement was mounting. Just like every Christmas before.

But this would not be like any Christmas before.

Our farm did not see much traffic in those days, situated as it was on the outskirts of a tiny, one-horse town. It was a quiet night as we ate dinner. Then, a blast of frantic honking cut through the peace. Beep, beep, beeeep. Strangers driving by had been able to see from the road what we could not from our dining room. The house next door was enveloped in flames. The house I had visited a thousand times. The house where she lived.

I stared wide-eyed across the yard at the unholy firelight and knew in my heart she was in there. Her mental health had been holding her prisoner in that house for years.

For a moment, we all froze in horror. Then, mayhem ensued. 9-1-1 was called. Boots were hastily pulled on. My father dragged a hose from the garage in a vain attempt to contain the blaze while the rest of us stood in the yard in the freezing cold darkness waiting for a fire truck we knew would be too late.

I won't bore you with the details. All you need to know is that at some point, after what felt like hours, an exhausted and filthy team of firemen wheeled a sheet-covered figure from the house on a gurney, staked CAUTION tape around the property, and slowly drove away.

We woke up the next day to a different world, the blackened shell of a house next door like a terrible mouth gaping open. "Merry Christmas," it mocked. "Joy to the world."

But I didn't care about Christmas anymore. Grandma was gone.

The next couple of days dragged by in a sluggish whirl of well-wishers, ham and potato casseroles, and stoic relatives, capped off by standing at Grandma's open grave in the pouring rain watching my father's broad shoulders shake. I had never seen him cry before. Never felt like this before. Never faced death before.

Christmas Eve arrived. The dull gray of the sky matched my mood. Dysfunctional as it was, I had had a special relationship with my grandma. I had felt...protective of her. With her, I was the grown-up and she was the child, unhappy and unsure. Unwell. I had thought she would get better if I loved her enough. I had hoped she would be happy again some day. But I could never seem to get through.

The house, her house, called to me. It drew me like a magnet, pulling me in to its soot-covered destruction. I ducked under the caution tape and slipped through the front door. It was quiet. The sharp smell of burned everything stung my nose. I didn't cry.

I saw her chair. Where she had spent most of her days and nights. Where she had watched soap operas on TV and pretended not to hear me when I'd sneak in to check on her. I stared at it. Was that where they'd found her? Why had she never turned around when she heard my footsteps? Never called my name? I had thought I could make her smile. But maybe she didn't want me there at all.

I was eleven. I knew nothing about how utterly a heart can be broken.

I wandered into another room in a daze. The carpet squished beneath my feet, saturated by thousands of gallons of water that had done nothing but keep the house from collapsing entirely. I stopped. There on the old, blue couch was a small pile of gifts. Wrapped and labeled.

My feet left dark prints as I crossed the room. The gifts seemed unharmed, a tiny piece of life and promise in the midst of despair. I saw my name.

I recognized her shaky handwriting. I sucked in a breath. She had remembered me. I picked up the small square box and the sodden red paper disintegrated under my fingers. I opened the gift.

A dainty gold bracelet, cheaply made but beautiful to me. I put it on and twisted my arm back and forth, back and forth. As the charms on the bracelet swung against my wrist, I thought of her in her chair. When had she gotten these gifts? How? I had thought she had fallen so deep into her addiction and hopelessness that nothing else mattered. But the cold piece of metal on my wrist told me otherwise.

I had mattered to her. She had seen me.

That Christmas was different than any before, tainted as it was by shock and grief, but I can see now that it taught me something. I learned that even if they don't seem to notice, you never know what your acts of kindness might mean to someone who's hurting. I learned that any Christmas can be someone's last so you should never take their presence in your life for granted. And I learned that being seen by someone else, being known, is a greater gift than anything that can be found in a box.
Posted by Katie Powner at 1:24 PM 10 comments: