I was at a high school basketball game the other night with my family. We sat in the bleachers, side by side, eating snacks and cheering loudly. Go, Tigers, Go! Patience was to my left. Little Man on my lap. Andy and the boys to my right.

That's when it hit me. 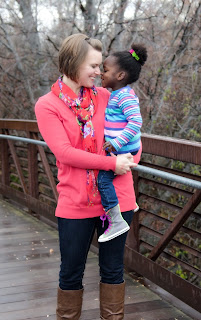 As I looked around the gym full of students and parents and teachers, I realized there were exactly zero black adults and three black children in attendance. All three of those children adopted, and one of them my daughter.

She didn't notice. At least not on a conscious level. But she will. At a basketball game some day in the not-too-distant future, she will become painfully aware of her minority status. And my heart is having a hard time figuring out what to do with that.

Some people do not approve of transracial adoption. They are aware of the many pitfalls of the practice, the potential for trauma and identity challenges, the loss of a child's cultural heritage, etc. - and they speak out against it. Other people approach transracial adoption with a "savior complex," as in, "look at all those poor black (or Filipino, or Indian, or whatever) children wasting away in orphanages, I must save them!"

At different times over the past three years, I've gone back and forth between "What have I done? I've ruined my daughter's life" and "She would've died if not for me" and everything in between. I've lain awake at night wondering what her life would've been like if we had not adopted her. Better? Worse? Maybe not better or worse - maybe just different. I don't know. I will never know.

Is transracial adoption a good thing? Would it be better if a child was adopted by a family of their same race? Would it be best if they had no need to be adopted at all, but could grow up with their biological family?

Part of me wants to answer YES to all of the above. But I can't. There are too many ifs, what ifs, buts, excepts, and maybes to give any real answer. There's no way to guarantee a child even a halfway decent childhood whether they're adopted or not.

Maybe Patience would've been better off with a black mother who would remember to put lotion on her legs every single day and could figure out how to do cornrows. Maybe she would be farther along in her development if she'd been adopted by a family who had experience with her particular kind of special needs. Maybe our family is not actually - gulp - the BEST thing that could've happened to her. But is our family good? Is a GOOD family better than no family even if it's not BEST?

These are the kinds of questions that run through my mind when I look around a very white high school gym and imagine my very black daughter playing there some day. I think about the people who would say I was selfish to take her from her native country and raise her in a white community. People who would say transracial adoption must be abolished before any more children fall victim to cultural identity loss.

And I wonder, and I fret, and I ask God to work everything out for good. And I ask Him to honor my imperfect efforts on my daughter's behalf and I pray she will have a happy, successful life regardless of whether it's because of us or in spite of us.

The Second Time Around

Over a year ago, after an interesting day of "firsts," I posted about how there's a first time for everything. One of the firsts I was referring to was our first foster placement, and many more "firsts" happened after that. The first time we met our foster son's bio parents, the first time we attended a Family Engagement Meeting, the first time we doubted our calling to be foster parents.

The first time we had to say goodbye to a child we had spent months loving and caring for.

All those firsts taught us a lot. We got through them. And he went home, and life went on.

Then one night, the phone rang.

"There's been an incident," the social worker said. "Can Little Man come back to your house?"

My feelings were mixed. Happiness to have the chance to see him again, snuggle him again. Sadness that his life was in chaos. Disappointment that his parents had made poor choices. Worry about what it might be like the Second Time Around.

And there was guilt. Not the same kind of guilt I wrote about here, but this vague sense that maybe there was more I could've done to help Little Man's parents after he went back to them. If I would've checked in on them, asked about Little Man, encouraged them to continue their counseling...would this have happened?

That's what went through my mind. But I said yes.

He hadn't lived with us for months, but when the social worker came and I opened the door, he recognized me. When he saw Patience, he smiled. I held him for a minute, wondering what his life had been like since I'd seen him last. Wondering what his future might hold. Then I plopped him in a highchair, kissed the top of his head, and went back to making dinner.

When Andy and the boys came home and saw Little Man at the table, they weren't fazed.

"For how long?" Andy asked.

Here's why: the Second Time Around is nothing like the first. It's scarier. Harder. A whole new set of challenges. He has the same bio parents as before, but our relationship with them is different now. He's the same kid as before, but he can communicate now. Before, he was a baby. Now he knows how to let me know what he's thinking and feeling. He reaches for me, wants all my attention. Calls me Mama.

He looks at me and cocks his head to one side. "Mama."

And there's another reason I've been hesitant to talk about it. Another reason I don't tell people that he's actually the same kid who lived with us before. I fear their reaction. Because some people think it's an exciting thing for us to have him back. They assume it's what I wanted. (No.) Or they have no idea how to respond. Or they think if he's back that must mean he'll never see his parents again because surely the state wouldn't send him back home a second time, right? Because people don't understand how the foster system works.

Now that the First Time for Everything has turned into the Second Time Around, I'm realizing the life of a foster parent isn't just about helping vulnerable kids. Isn't just about giving them a safe place to live temporarily. That would be easy. The hard part is learning and growing and letting go of all the things you can't control (which, in foster care, is just about everything). The hard part is answering all the well-meaning questions and misconceptions without compromising Little Man's privacy or my sanity.

So if there's a foster parent in your life and they have a child return for the Second Time Around (or third or fourth), don't dig for information or tell them how much harder it will be to say goodbye this time. Don't assume the foster parents plan to adopt the child now. Don't ask how long it's going to take.

Don't say anything except "Oh, I see. What's your favorite kind of chocolate?"
Posted by Katie Powner at 12:47 PM 3 comments: