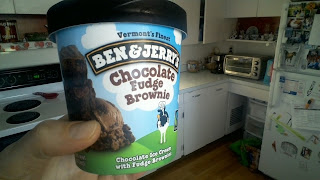 I've never been one for making New Year's resolutions. They just seem like big disappointments waiting to happen. To resolve something is so...so...I don't know, it just seems so definite.

But I do like to set some reasonable goals. For example, this year I figured I should stop buying so many books online and just GO TO THE LIBRARY, for crying out loud. That's what it's there for. There's no more room on my bookshelves, anyway. But of course there's that one book that's not available in the library because it's indie published, and if I'm going to buy that, I might as well buy some other ones because, you know, free shipping!

I also thought it was time to try to eat healthier. The extra fat on my stomach didn't get there by itself. Then again, I love chocolate ice cream and candy a LOT, and life is short, right? But I know I should make better choices, so I didn't eat the whole carton of Ben and Jerry's in one sitting. I ate it in two.

Then there's this crazy idea I had that as a 33-year-old woman I should try to not be such a slob. I'm a wife, mother of four (currently), homeowner, checkbook balancer. I have a blog, for heaven's sake. I'm pretty sure all those things make me a grown up. I should be able to shower before leaving the house, and wear clean clothes in public. But this morning I went out on day number three with no shower, and when I saw the big blob of something on my shirt (no idea what it was, sniff tests were inconclusive), I just buttoned my other shirt over it and called it good.

So I guess you could say I'm 0 for 3 so far. Not even February yet and I haven't been able to stick to a single "reasonable goal." But you know what I think is beautiful about a new year? It's that I still have eleven more months to visit the library, practice restraint in my eating choices, and tidy up my appearance. I haven't failed, and I'm not giving up. Instead, I'm going to thank God for another day, another year, to make better choices. To be a better person. And there's a whole lot more to that than how many M&M's I do or do not eat.

Maybe you made a resolution, or set a goal. Maybe you're discouraged because it's not going well. Or maybe you're knocking it out of the park, in which case, I salute you! But regardless of how the old one ended or the new one started, this year is full of possibilities...full of the potential to do better, to do good. The Bible says that God's love and compassion for us is new every morning. Every morning!

So let's all resolve to greet each new day with the love and compassion only God can supply and make the most of this new year. None of us knows what is to come or how many times we might end up doing that very thing we said we weren't going to do, but we can embrace love and compassion and have hope.

And that's a resolution I can get behind.
Posted by Katie Powner at 3:37 PM 2 comments: