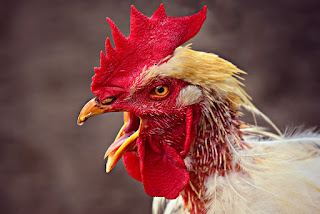 In all our five years of chicken ownership, I'd never seen anything like this. It almost defied description. But let me start at the beginning.

Our chickens have met their demise in a variety of ways over the years. Some have quit laying eggs and been "retired" to a friend's farm where they could live out their final days in the open air. Some have died as babies, having been either chilled or exposed to something during the transition between the suppliers, Murdoch's, and our house.

One inexplicably broke its own neck, possibly by coming in for a hard landing on the slippery floor of the coop. We found her body the next day.

These things happen. It's the circle of life.

Anyway, it was a mild, sunny day and my son Michael had been instructed to feed and water the chickens, and check for eggs. The chickens are his responsibility because he's the one who wanted them in the first place. Plus, it's good for a 10-year-old boy to have a job. So out he went to tend to his duties.

I knew something was wrong when Michael burst back into the house shouting, "Mom! Come quick!" Well now, he hardly ever needs me for anything anymore, so I went and I went quick. I followed him to the coop.

"One of the chickens is dying," he said.

Sure enough, one of the ladies was lying on her side in the chicken run, fully immersed in the throes of death. Each wheezing, gasping breath had the potential to be her last as she struggled to lift her head out of the dirt. I knew what I had to do.

Now, important to the story is the fact that chickens are bullies. As is the case with many creatures who live in herds, flocks, or other groups, they do not have any patience for the weakest link in the bunch. They live by the "pecking order." So I knew the quickly expiring chicken was in danger of being pecked at as she lay dying. She was defenseless.

"It's time for me to make dinner," I said to Michael. "But I'll move her out into the grass so she can die in peace."

She didn't put up any kind of fight when I picked her up and moved her into the yard. Her sharp, beady eyes stared at me, filled with panic, but she was unable to muster up any resistance. Michael sprayed a stream of water from the hose down her throat, hoping to either ease her discomfort or drown her, I'm not really sure, and then I set her down in a nice warm patch of grass and gave her a pat on the head.

Yes, I could've wrung her neck and put her out of her misery, but I lacked the conviction. And I had a meal to prepare, which was, incidentally, not chicken soup. So I went inside and, frankly, forgot all about it.

A little while later, Andy came home and we all gathered at the kitchen table for dinner. We talked and ate and laughed, and then Andy glanced out the window.

"Why is there a chicken wandering around the backyard?" he asked.

No. It couldn't be. That chicken was as good as dead.

It was nothing short of a miracle. Goldie was ambling around, pecking at the ground, as if nothing had happened. I had counted her out, and she had somehow found her way back to the land of the living to lay eggs another day.

The jury's still out regarding what really went down. Some say she faked the whole thing in order to get into the grass. Some believe she had something stuck in her throat that Michael's spray with the hose dislodged. We'll probably never know.

But the moral of the story is applicable to all of us: don't be too quick to give up. Even when things seem dire, there is always hope. Whether it's a person, a situation, a job, or whatever else that you're tempted to write off, hold on to your hope and don't give up!

And never believe a chicken when she tells you her time has come.
Posted by Katie Powner at 12:36 PM No comments:

When "No" means more than No 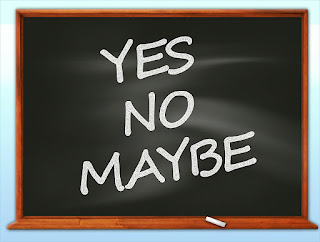 We get kind of used to it, don't we? Kind of numb to the idea of it, the effect of it. We say "No" with both nonchalance and impunity, believing we know what we're doing.

I said "No" yesterday.

But it wasn't like any No I've ever said before. It was a No that cut me up and opened my eyes to what a burden the word No really is.

One of the hard-working, vastly underappreciated people at the Department of Public Health and Human Services called about a possible foster placement. LH has been gone for almost two months now, as you all know, and we've been wondering when we might get a call like this. We've been expecting it. Anticipating it, even.

But I said No.

The placement was for three children. Young children. Siblings DPHHS is trying to keep together if possible. Children who had already been removed from one home and turned out from another because the family couldn't make it work. (And go ahead and try taking in three traumatized little ones out of the blue one day before you dare judge a family who gave it their best shot but couldn't make it work.)

We knew going in that there would be moments like this. We knew it would be our responsibility to decide which placements we would or would not take. But nothing could have prepared me for the crushing weight of that small two-letter word.

I didn't want to say it. I knew what my No meant to those kids. It meant they would remain in limbo. It meant a loss of whatever love and stability they would find in our home. It meant they were that much more likely to lose each other, because with every No, DPHHS would become more and more desperate and begin to consider other options. Such as splitting them up. I did not want that for them. I did not want to say No.

I had a lengthy conversation with the woman on the phone. We discussed every angle of the situation, searching for solutions. Searching for hope. But in the end, we both agreed it wouldn't be a good fit. I can't and won't go into all the reasons for that, nor is it necessary for anyone to know, but a lot of it came down to simple geography. And so my answer was No.

I think I said Yes to my family and what's best for them - Yes to the bigger picture of what's hopefully best for those three kids - Yes to the feeling in my gut that it was the right thing to do.

Yes to trusting that God has a plan. That He knows what He's doing.