I read an interesting article called "Why High-Functioning Autism is so Challenging." The article talked about how people with high-functioning autism "pass for normal" in most situations, until a situation comes along where their responses are not "normal," and people around them often end up surprised or upset.

In other words, people with high-functioning autism appear to be like everyone else - until they don't.

So how do you parent a child like that? Maybe it's autism, or maybe it's one of a hundred other invisible challenges, such as SPD, Asperger's, TBI, epilepsy, RAD, PTSD, anxiety, or something the doctors don't even have a diagnosis for. Maybe it's debilitating headaches with no known cause. Maybe it's hypersensitivity to sugar or red dye 40 or a potentially fatal allergy to peanuts.

All invisible from the outside.

How does a parent meet such a child's needs, set them up for success, and get the world to accept them for who they are when everyone else sees a "normal" child who should be able to do everything the same as every other John or Jane Doe on the block?

I wish I knew.

When our daughter joined our family, she was 17 months old. Many people perk up when they hear this because they assume her transition must've been easy since she was so young. She'll never remember her life before. She was basically a blank slate when she arrived.

What those same people often don't realize is that the first year and a half of life - the year and a half that we missed - are the most crucial for brain development. If trauma, abuse, neglect, malnourishment, etc. occur during that first year and a half, it can have a long-lasting negative impact on a child's brain. It can cause a child who appears healthy and "normal" on the outside to struggle with dysregulation on the inside.

Did you know that? I didn't. Not until we began our adoption process and had to start reading books and taking training classes about common challenges adopted kids face. But I know a lot about it now.

And I'm not the only one.

There are thousands of parents out there (many of them adoptive or foster parents) struggling to parent a dysregulated child. They want their child to be treated the same as everyone else, but they also break into a sweat when little Johnny is invited to a birthday party at Chuck E Cheese. Because they've seen that movie before. The one where little Johnny gets overstimulated in a public place, has a meltdown, and doesn't sleep for three days.

These parents often feel alone, and don't ask me how I know. When they succeed at controlling their child's environment and schedule so as to minimize opportunities for problems, they are seen as overbearing. When they fail, others say they need to "discipline more." Part of them wants everyone to keep believing their child is "normal" for as long as possible, but another part wonders...what does normal mean anyway?

What if society at large, and the church - God's hands and feet in the world - in particular, could come around families like this and turn invisible challenges into visible support? What would that look like? Maybe a good place to start is the same place we should start when facing just about any challenge: with knowledge and compassion.

KNOWLEDGE: Knowledge means to learn! Learn about a dysregulated child's needs. Learn about their triggers. Is it noise? Sugar? Unexpected transitions? Men with beards? It could be anything. I know of a child whose entire day can be derailed by anything resembling an octopus because of a traumatic experience. It might sound funny, but a terrified child is no laughing matter. Learn how you can make their day at school easier, or what you can do to bring out the best in them. Learn how you can support their parents.

I'm ashamed to tell you this, but I was quick to judge the parents of kids with invisible challenges...until I became one. Now I spend my days redefining what "normal" means in my life and desiring to be the kind of person who is sensitive to the needs of others. Because everyone is struggling with something.

And it might be something invisible.
Posted by Katie Powner at 12:52 PM 2 comments: 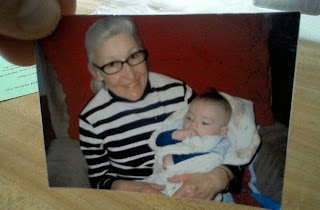 It was pretty nice as far as nursing homes go. Maybe the nicest I'd ever seen. But I hated it.

The door was closed so I knocked lightly.

"Hi Grandma," I said to the petite, frail woman with white hair sitting on the bed.

Please let her remember me.

Even with all her things in there - her pictures and hats and knick-knacks - her room looked foreign and unfamiliar. I had sworn I'd never let one of my own family members end up in a place like this. Andy and I had even had plans drawn up to remodel our house, complete with a handicap bathroom, so my grandma could come live with us. But when Alzheimer's begins its cruel work in earnest, everything changes.

Grandma sang the "Teddy Bear's Picnic" song to the boys, and we visited. Then we left Room 117 and walked around the inside of the building, Grandma's slow shuffle appearing painful because of her hunched back. The boys stared wide-eyed at old women shouting at houseplants and old men sobbing in wheelchairs. I couldn't believe it had come to this.

At first Grandma spoke with a measure of normalcy about her disdain for "this place," her distaste for the food, and her disbelief that Grandpa would leave her here. As if he had a choice. Then, before my eyes, she transported to a different time, years ago, and found herself on a boat. She could no longer see what I saw or know what I knew.

Curse you, Alzheimer's. Curse you to the depths.

I was emotionally exhausted by the time Grandma found her way back to the present, back to me, and my kids can only take so much, so I told Grandma it was time.

I knew she would be disappointed, but nothing could've prepared me for the look of desolation that passed over her face. Her eyes stared into me, asking a hundred questions at once: How could you leave me here? Where am I? What's going to happen to me? Who are you? But she didn't say any of those things.

"You'll come back again and visit, won't you?" she asked instead.

I answered, but as soon as the word "Yes" left my mouth, I knew in my heart it wasn't true. I knew that even if I had the chance to drive the six hours to visit her again, she wouldn't be there. Her body might be - but she would be gone. Lost forever in the murky, gray fifth dimension of Alzheimer's disease, and I would never talk to her again. She would never know me again. This was goodbye.

I knew it as clearly as I knew the sun was shining outside. I leaned down to give her a gentle hug, hating myself for being so anxious to get out of a place she'd never get to leave.

My eyes were misty, but I forced a smile.

My words stuck in my throat, but I forced them out.

"Goodbye, Grandma. I love you."

"Goodbye dear," she said. Then she sat down in a chair and peered down the hallway at another world, her hands folded neatly in her lap. "I'll just wait here for the train."
Posted by Katie Powner at 9:49 AM 4 comments: